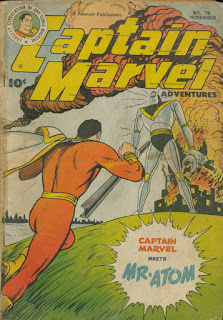 Mr. Atom was introduced to us in Captain Marvel Adventures #78, and interestingly it is Mr. Atom himself who tells us his origin.  As I read through this story I couldn't help but think of Mr. Atom as an atomic version of Frankenstein.

Dr. Charles Langley created Mr. Atom when he focused an atomic energy ray onto a robot he had built.  A huge explosion leveled Langley's lab and Mr. Atom came to life out of the wreckage.  Captain Marvel rescues Langley from the debris while Mr. Atom begins to walk around Fawcett City gaining a lot of attention.

We soon catch up with Mr. Atom at the United Nations where he begins to threaten the world with force but is interrupted by a confrontation with Captain Marvel.  In this first fight between Cap and Atom, Cap is a bit surprised that Mr. Atom can stand up to his punches.  The fight ends when Mr. Atom punches Cap right out of the building!

No, Mr. Atom didn't win the fight!  Instead, Captain Marvel realized that he needed to develop a plan to deal with Mr. Atom so he allowed him to think he had defeated Cap. Then, using the wisdom of Solomon, Cap devises a fool-proof plan. 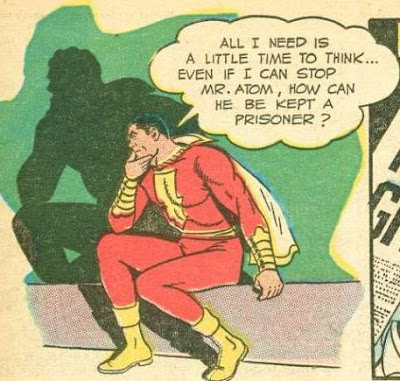 With his plan in place, Captain Marvel re-engages Mr. Atom in combat and with one final mighty blow, Mr. Atom is defeated.

Mr. Atom says, "Captain Marvel was too much for me--that time!  But he could not finally destroy me.  Like the atom that gave me birth, I exist forever."  Mr. Atom then gives us a final warning, followed by some closing comments by Billy Batson.

I really enjoyed this story and especially the artwork showing Captain Marvel and Mr. Atom delivering their mighty punch.  I also liked the fact that Captain Marvel used his wisdom to devise a plan that would fully deal with Mr. Atom - he just didn't trade punches with him all day long!

That is the origin of the nuclear nightmare known to Captain Marvel fans as Mr. Atom!