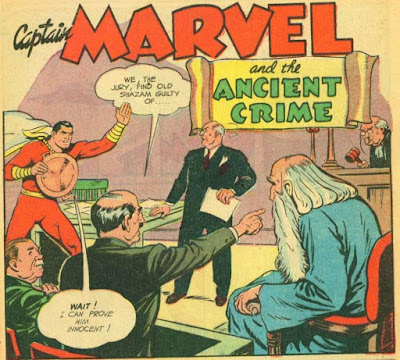 While Billy Batson was reading a book on ancient Egypt, he came across a story that said Shazam had stolen gold and jewels from Pharaoh.

Billy just knew this couldn't be true and so he calls upon Captain Marvel to travel back in time to solve this perplexing problem involving the wizard Shazam.  And as only he can do, the World's Mightiest Mortal cracks the case and reveals the true criminal, thus clearing Shazam of any wrongdoing!

Did you know that Captain Marvel once traveled back in time to prove Shazam innocent of a crime?  I didn't, but I do now!

Email ThisBlogThis!Share to TwitterShare to FacebookShare to Pinterest
Labels: Captain Marvel's Character, Did You Know, Shazam