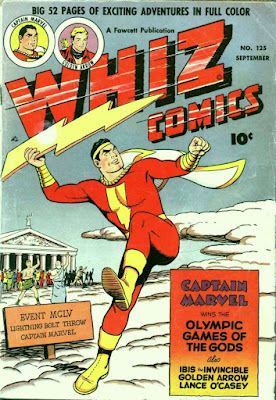 While our Summer and Winter Olympics occur every four years, there are other Olympic games held every 1000 years!  Whiz Comics #125 (published July 7, 1950) gives us all the details of these games and how Captain Marvel became an Olympic champion in the story, "Captain Marvel and the Olympic Games of the Gods!"

The story begins with Billy Batson enjoying a beautiful day as he takes a stroll during his lunch break.  Suddenly, a severe storm strikes and Billy must transform to Captain Marvel to save a young lady.  Billy speaks the magic word, "Shazam!" but for once the magic lightning doesn't strike!  Without hesitation, Billy leaps into action and saves the young lady.

With the storm raging and gaining in intensity, Billy is perplexed as he says the magic word again and again but there is no magic lightning.  "Why doesn't Zeus hear me and send down the lightning bolt?" Billy wonders.  Unbeknownst to Billy, Mercury has heard Billy and tells Zeus.  Zeus is too preoccupied with practicing his lightning bolt throwing but finally sends a magic lightning bolt to Billy, transforming him into Captain Marvel.

Captain Marvel quickly decides he needs answers to what's behind the odd events of the day, so on a hunch he flies to Mount Olympus, home of the gods.  At Mount Olympus he meets Mercury and Zeus, and the wizard Shazam arrives as well.  Shazam explains to Cap that the gods are at Mount Olympus competing in the Olympic games of the gods.  Shazam further explains that these games are held every 1000 years and the competition is between the Shazamers and the Netherites.  The Shazamers team roster is Solomon, Hercules, Atlas, Zeus, Achilles and Mercury.  The Netherite team consists of Vulcan, Centaur, Thor, Mars, Ajax and Neptune.  The winners receive no gold medals.  Shazam explains, "Whichever team wins is then given control over your earth!"  The Shazamers have always won, but in these games they are badly behind.  If the Netherites gods win, not only will they take over the earth but they will also banish Captain Marvel, Shazam and the Shazamers from the earth, sending them into oblivion for 1000 years!  Just then, Mars tells Shazam and Captain Marvel, "When we win and take over earth, we'll start a war down there right away!"  As you can see, these are very important Olympic games. 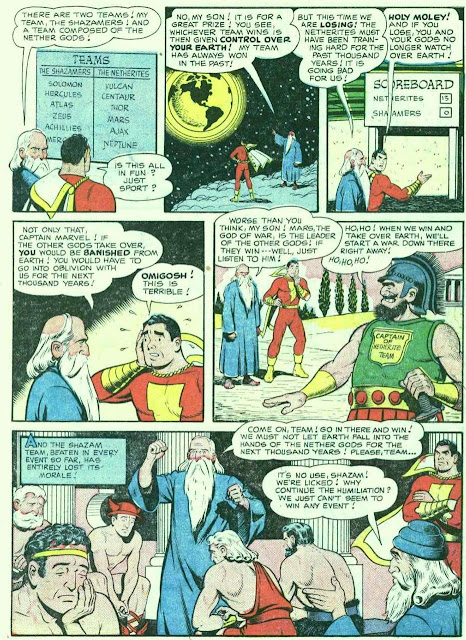 Shazam tries to rally the Shazamers but they are too discouraged and dejected.  On the verge of having to forfeit the games, Captain Marvel volunteers to finish the rest of the competitions.  Cap defeats Centaur in the 100 mile dash, and despite Neptune's sea-faring shenanigans, Cap wins the boat race around the world.  Cap evens the score by defeating both Thor and Vulcan as well! 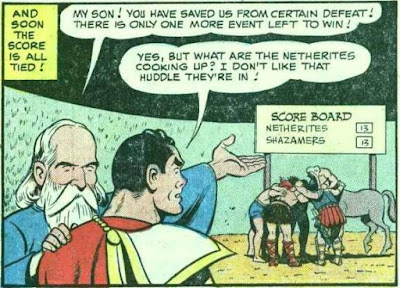 The final event is a gladiator match between Mars and Marvel.  Mars has some tricks up his sleeve and says the word, "VCTMAN!" and is struck by a bolt of black lightning!  Mars now possesses the powers of all the Netherite gods.  The next trick Mars has is using one of Zeus' lightning bolts and throwing it at Captain Marvel, transforming him back into powerless Billy Batson.  Billy may be powerless, but he isn't helpless.  Billy distracts Mars just long enough for him to transform back into Captain Marvel who defeats Mars and seals the win for the Shazamers! 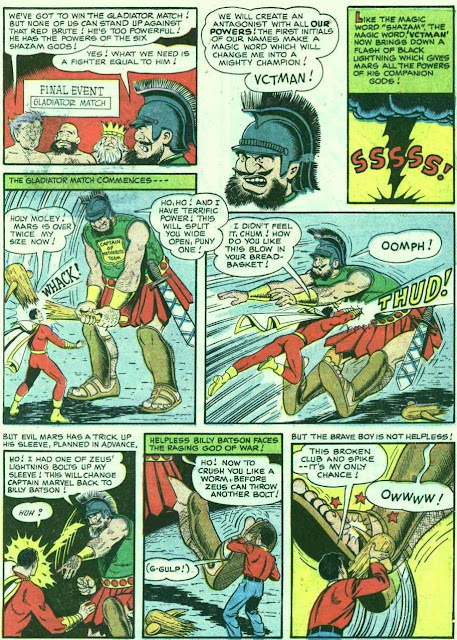 Shazam thanks Captain Marvel saying, "Thanks my son!  You single-handedly defeated the Netherite gods!  I and my gods will continue to watch over earth for the next thousand years!"  Captain Marvel humbly replies, "Don't thank me, great sir!  It was only my duty!" 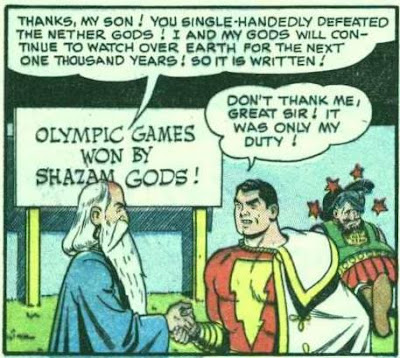 Holy Moley what an adventure!  There's so much to like about this story.  I like how both Captain Marvel and Billy Batson are heroes.  I like how the story showcases Captain Marvel's character, we see him as a hero, respectful to Shazam, and humble in victory.  We learn that it is Zeus who throws the magic lightning that transforms Billy into Captain Marvel.  We learn that there is an Olympic game of the gods that determines who controls the fate of planet earth.  And, we learn that Shazam the wizard is earth's great protector!

Thanks to Captain Marvel we can rest in the fact that Shazam and the Shazamers are watching over our earth and protecting us!  Hopefully the Shazamers will win the next Olympic games of the gods in the year 2950! 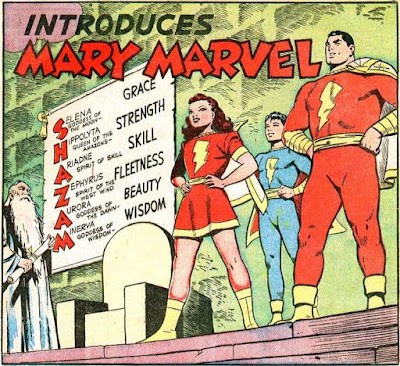 Mary Marvel's origin is given to us in Captain Marvel Adventures #18 (published November 13, 1942).  Within the pages of this comic we not only have her origin, but we also learn that she's Billy Batson's twin sister! 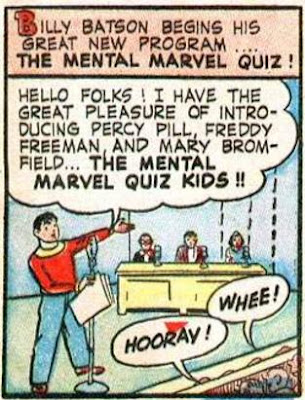 The story begins with station WHIZ hosting the The Mental Marvel Quiz show, with Billy starring as emcee!  The contestants are Percy Pill, Mary Bromfield, and Freddy Freeman.  Billy starts with the quiz questions, and each contestant proves they are up to the mental challenge.  While an announcer takes over with some commercial announcements, Billy is handed a strange hand-written message that says, "Dear Billy Batson, I am dying.  Please come and see me.  This is most urgent."  The letter is signed by Sarah Primm of 14 Elm Street.  Billy has only 5 minutes before The Mental Marvel Quiz begins again, so he transforms to Captain Marvel and within seconds arrives at Sarah Primm's house.  Captain Marvel transforms back into Billy before entering the house.

Inside, Billy meets Sarah Primm who is on her deathbed.  She tells Billy that her hour has come and she must tell Billy about...his twin sister!  Sarah reveals that she was nurse for both Billy and his sister Mary when their parents died.  She took the babies into her own home before taking them to an orphanage.  However, Sarah was also the nurse of a rich family who had also just had a baby girl that had suddenly died.  Sarah came up with a scheme - she switched Billy's sister with the dead baby girl of the rich family.  Billy's sister would be raised by the wealthy family and Billy was taken to an orphanage.  Billy asks, "Who raised my twin sister?  Where is she now?  How will I know her?"  Sarah tells him, "You'll know her by this broken locket.  She wears the other half.  (Sarah gives the locket to Billy) She was raised by a wealthy lady named...."  But death strikes before Sarah Primm can reveal the name of the family that raised Billy's sister.  Billy's 5 minutes are almost up, so he transforms back into Captain Marvel and returns to The Mental Marvel Quiz. 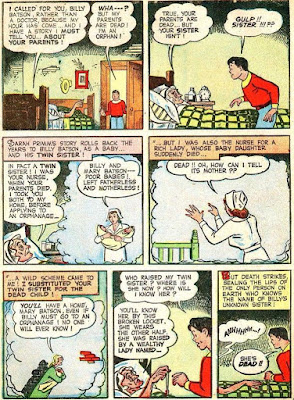 The Mental Marvel Quiz comes to an end and Billy escorts Mary Bromfield to her car and after she leaves he realizes she was wearing a locket just like the one Sarah Primm gave him.  Billy and Freddy Freeman say their magic words and transform into Captain Marvel and Captain Marvel Junior and take off after Mary.  The two heroes arrive just in time to see Mary being kidnapped!  In short order the ruffians are dispatched and Captain Marvel  asks Mary about the locket she's wearing.  Cap gives Mary the locket Billy was given by Sarah Primm, Mary puts the lockets together - a perfect fit!

"What does it mean?" Mary asks, and Cap proclaims, "It means you are Mary Batson -- the twin sister of Billy Batson!"  Mary asks where Billy is and why didn't he come, and then before her eyes Captain Marvel transforms back into Billy Batson!  Billy lets her in on the 'family secret' and then Captain Marvel Junior also transforms back to Freddy Freeman - now Mary knows the secret of both Captains.

While Billy, Mary and Freddy are rejoicing, the ruffians have recovered and capture the two boys and put handkerchiefs over their mouths.  Unable to say their magic words, Billy and Freddy are at the mercy of the hoodlums.  Mary shouts, "Billy!  Freddy!  Speak your magic words!...Oh, they can't they're gagged...Billy can't say Shazam!..."  The comic narrator tells us, "Mary Batson said the word 'Shazam' for the first time...and instantly there is an answering roll of thunder...a blinding flash of lightning...and a new figure appears in the place of Mary Batson!"  Yes, Mary Batson has just transformed into Mary Marvel!! 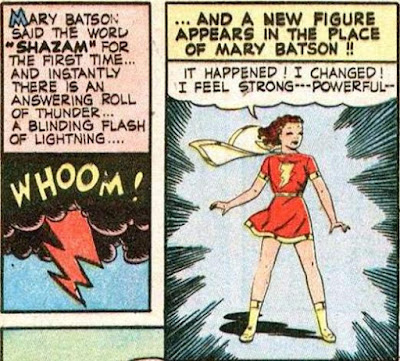 Mary Marvel withstands the kidnappers assualt of assorted slaps, chairs and bullets before she defeats them single handed.  Billy's astounded at Mary's transformation and decides they need to visit the wizard Shazam to get some answers.  Billy and Freddy transform into their heroic selves and the three Marvels make their way to the secret subway tunnel where Billy first met Shazam.

Shazam meets them and Billy introduces Mary to him.  Shazam assures them all is well, he knew all along about Billy and Mary, but he allowed things to unfold naturally.  Shazam also explains that Mary doesn't derive her powers from the same heroes Billy does, but instead, hers are sourced from a different set of Shazam's heroes.  He explains who gives Mary her powers:


Shazam then tells Mary, "Go now, my child!  Fight evil and wrong in the world as your brother and Freddy do.  My spirit is always with you!"  The three kids exit the subway and transform into the mighty Marvels.  Freddy departs - telling them he needs to get back to his own adventures.  Cap tells Mary to stay with him for a while and then they'll fix her up with her own spot in Wow Comics! 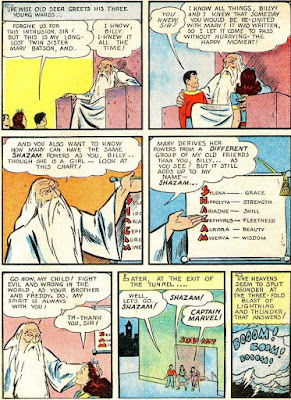 Holy Moley!  What a turn of events that led Billy to not only find his twin sister, Mary, but also to learn that Mary is also a mighty Marvel.  Now the Marvel Family is complete and individually and collectively they do fight evil and wrong in the world.