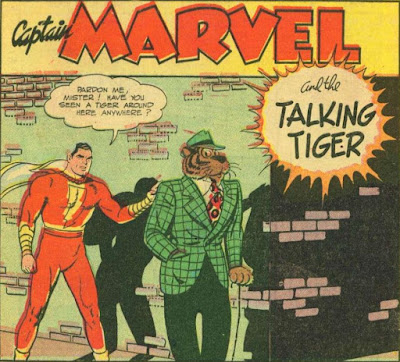 Mr. Tawny was just a cub when a hunter killed his mother, making him an orphan (just like Billy Batson!).  Tawny escaped the hunter's grasp, and was taken in by Tom Todd, the son of a missionary.  Tom and the tiger cub were the closest of friends, Tom even had the cub sit on his lap during school!  It was Tom Todd who gave him the name, Mr. Tawny.

Mr. Tawny grew, but he and Tom were still great friends.  Then, one day a man was found killed in the village - his death came at the hands of a tiger.  All fingers pointed to Mr. Tawny as the killer.  Tom defended Mr. Tawny but the village decided he must die, so Tom and Tawny ran away far into the jungle.  Tom just knew his feline friend was innocent.  He said, "You didn't kill that man, did you?  I'm sure you didn't!  But if you could only talk and say so...If you could only tell them you didn't kill anybody!"  Just then a hermit approaches them and asks Mr. Tawny to drink a serum he had just created and wanted to test on a wild animal.  The serum would energize the animal's brain and enable him to use his vocal cords for speech!  The tiger drinks the serum and then Mr. Tawny tawks - I mean talks!  And not only can he talk, he can now verbalize all the knowledge he absorbed as he went to school with Tom!!

Tom and Tawny leave the jungle and return to the village to search for the real man killing tiger.  Tawny finds the killer and after a ferocious battle he brings the defeated man killer to the village and proves his innocence.  Mr. Tawny is cleared of the crime!  Later, Tom left the jungle when his dad was reassigned and Mr. Tawny lived with the hermit.  That's the story of how Mr. Tawny became a talking tiger, but now we need to know how he came to become friends with Captain Marvel.

Despite the hermit telling him civilization is no good, Mr. Tawny made up his mind that he wanted to leave the jungle and "mingle with human beings."  He wants to try ice cream, watch movies, and wear clothes!  Tawny makes his way to the coast and becomes a stowaway on a ship bound for the United States.  When the ship makes port the stowaway tiger jumps ship determined to make it to the city. 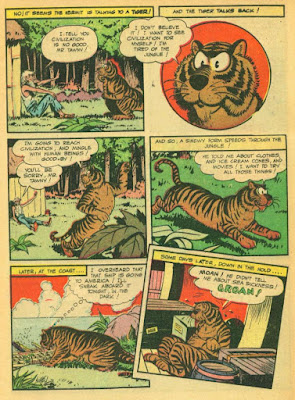 The second person Mr. Tawny encounters is Billy Batson (the first person he encountered ran away scared to death!).  Upon seeing the tiger and not knowing Tawny is a gentle, talking tiger, Billy says the magic word, "Shazam!" and transforms into Captain Marvel.  Cap knocks Tawny unconscious and ensures he makes it safely to the zoo.

Mr. Tawny escapes his cage at the zoo, and after a brief adventure he once again encounters Captain Marvel.  But this time Cap realizes Tawny is a civilized tiger and in short order gets Mr. Tawny a job at the local museum.  Despite a rocky start, Mr. Tawny and Captain Marvel become great friends! 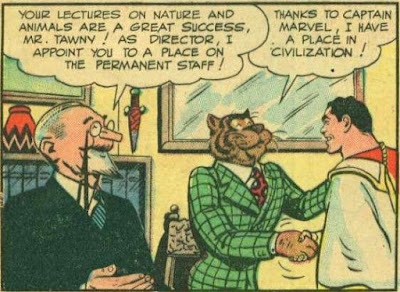 We know that Tom Todd gave Mr. Tawny his name, but how did he get his first name Tawky?  He got the name Tawky thanks to fans who responded to Captain Marvel and Mr. Tawny's appeal for suggestions for his first name.  Thousands of suggestions poured in and in Captain Marvel Adventures #90 Mr. Tawny revealed he chose the name Tawny!  (I wrote about this previously, you can read it here!)

Let me share a brief comment* from Otto Binder, creator of Tawky Tawny.  In an interview Mr. Binder said, "As far as I can recall, Tawny was my own concept, which Wendell Crowley - and C. C. Beck in particular - thought was a good concept...Beck did such a great job personifying the tiger that he caught on with readers immediately.  A flood of letters came in on the first story, so we continued him.  Captain Marvel was really just a minor character in all of his stories, the tiger's sidekick.  We made Tawny as lovable and bumbling as we could...He always had great dreams, with unfortunate results.  I wouldn't say Tawny stories were satires...they were more like parodies of human life, showing our weaknesses."

That's the origin of Mr. Tawky Tawny and how he came to know and be friends with Billy Batson and Captain Marvel.  Mr. Tawny would have many adventures of his own in Captain Marvel's comics and has become one of comics most beloved characters.

*I found Otto Binder's comments on page 64 of the book The Fawcett Companion: The Best of FCA edited by P. C. Hamerlink (Copyright 2001, TwoMorrows Publishing).
Posted by Jeff at 7:01 AM