Integrity.  This is another aspect of Captain Marvel's character that draws me to him as a hero.  In this post I will look briefly at Cap's integrity.

What is integrity?  Here are some thoughts and definitions to help frame integrity for this article:


An example of Captain Marvel's integrity is found in Captain Marvel Adventures #62.  In this adventure Captain Marvel is facing Oggar, the world's mightiest immortal.  Oggar is trying to take over the world and Cap is there to stop him.  They are both evenly matched in fighting, so Oggar calls for a truce to talk and Cap agrees to a temporary halt in their fight.

Immediately Oggar tells Cap, "Look, Captain Marvel, you and I can go far together!  Why not join me?"  Oggar then presents Captain Marvel with a bribe of gold!  Cap's incorruptibility comes through as he exclaims, "I don't want a penny of it!  You can't buy me off, Oggar!"

The integrity of Captain Marvel is just another aspect of his character that makes him a true hero.  It's just another reason why he has been around for 75 years and I'm sure for many years to come.  In today's dark and gritty comic world it is refreshing to have a character that has integrity and provides us with wholesome entertainment and a good example to follow!

Did you know Captain Marvel Adventures had an advisory board to help them "maintain high standards of wholesome entertainment" in their comics?  At one time, the distinguished board consisted of such noteworthy people as Eleanor Roosevelt, former First Lady of the United States and Admiral Richard Byrd, famed aviator and explorer of the Antarctic.

While members of the advisory board would change over time, the wholesomeness of Captain Marvel's adventures did not!  That is just part of the reason that Captain Marvel has maintained his popularity over the last 75 years!

Email ThisBlogThis!Share to TwitterShare to FacebookShare to Pinterest
Labels: Did You Know

You can define humility in many ways.  Here are a few thoughts to consider: 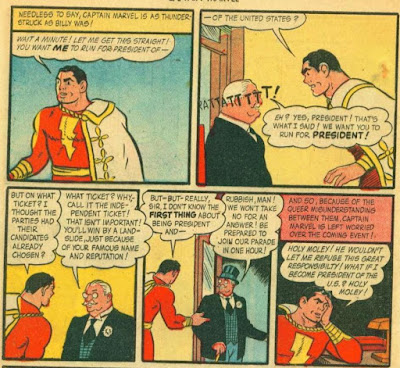 Captain Marvel is truly humbled at the prospect of being elected to our nation's highest office.  He doesn't become conceited or even think he has the right to this office as he is, after all, the world's mightiest mortal!  No, Captain Marvel remains true to his character and remains a humble hero.

The second example comes from Captain Marvel Adventures #69.  In this adventure we have Captain Marvel being given the honor of becoming a Knight of the Golden Stocking from the country of Grafstan.  When Cap first hears of this honor, he wants to humbly turn it down!  But when he sees that it would be a great affront to the King of Grafston, he humbly accepts the honor. These are just two examples that showcase Captain Marvel's humble hero character.  Though he is the world's mightiest mortal, he never insists on being honored or lifted up.  He puts others before him and serves Fawcett City - and the world - with a true servant's heart.

Humility, that is just one of Captain Marvel's character traits.  It is his humility that draws many fans - regardless of generation - to him as their hero. 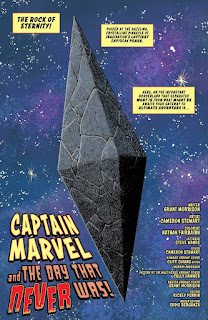 Did you know that Dr. Sivana, the world's maddest scientist, invaded the Rock of Eternity?  If you read 2014's Thunderworld adventure, you may have thought that that was the first time Sivana stepped foot on the Rock of Eternity.  But you may not have known that the first time Sivana invaded the Rock was in Captain Marvel Adventures #100!  I didn't know that until I read that issue!! 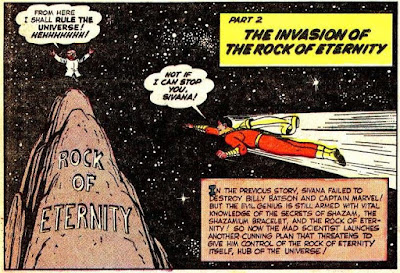 In Captain Marvel Adventures #100, Sivana tricks Shazam into giving him the shazamium bracelet - thus allowing Sivana the abilities only the wizard Shazam has!  Sivana quickly goes to the Rock of Eternity where he plans to rule not only the world, but the universe as well!

Email ThisBlogThis!Share to TwitterShare to FacebookShare to Pinterest
Labels: Did You Know, Dr. Sivana, Rock of Eternity, Shazam, Time Travel 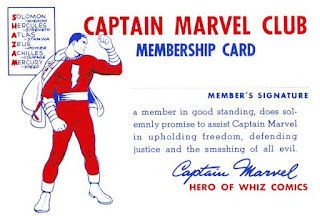 I previously wrote a brief article about the Captain Marvel Club which you can read here.  As a member of Cap's club, you received a membership card with Captain Marvel's Secret Code on the back! 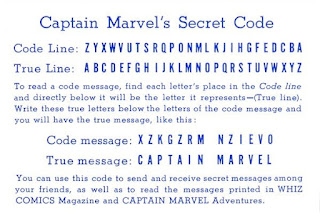 The code allowed club members to send coded messages to each other and also decode messages from Captain Marvel and Billy Batson in Cap's comics.

Interestingly, the Captain Marvel Club Code made a comeback in Jeff Smith's 2007 Shazam!: The Monster Society of Evil and in issue #1 of Billy Batson and the Magic of Shazam! (2008).  I don't have any screen shots of how they used the code but I do know Jeff Smith used the code in the titles of each issue.

While doing some research on this I found a great resource on the Marvel Family Web.  They created a way to create and decipher messages using the Captain Marvel Club Code!  Holy Moley what a fantastic resource!!!  Simply click here and then scroll to the bottom of the page and follow the directions!

I plan on using the Captain Marvel Club Code on occasion on Twitter and here on the blog - just to try and bring back some of the golden age shine of our hero, Captain Marvel!

Let me give a special thanks to Carl (@LetsTalkShazam on Twitter) for the Captain Marvel Club graphics at the top of this article.  And thanks to the Marvel Family Web for putting together the decoder!!!

The Son of Shazam?

Whiz Comics #105 raised an interesting and troubling question - does Shazam have a son?  I wasn't quite sure where the story would lead when I started reading it! 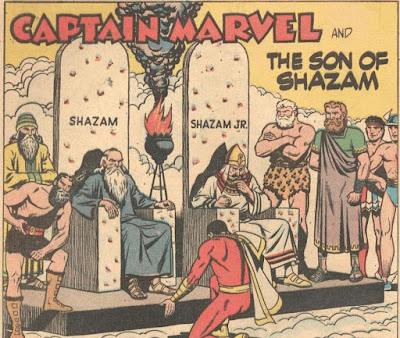 Cap's adventure begins with Billy Batson reporting on Fawcett City's museum unpacking a shipment of Egyptian artifacts.  As one urn is opened, a man appears from it.  Billy Batson says the magic word, "Shazam!" and Captain Marvel appears to confront the man that has come forth from the urn.  Is it a genie or an evil spirit?  No!  Holy Moley, the man claims that he is the son of the wizard Shazam!!  The son of Shazam even calls forth Shazam's spirit and Shazam orders Captain Marvel to obey his son in all things.  Captain Marvel bows before Shazam, Jr. and tells him he is at his service.

Captain Marvel is then ordered to fly Shazam, Jr. to a location where he will build a temple.  The temple isn't for worship but will be home to a hospital, charity ward and will provide food for the poor.  But to build this temple, they will need money so Captain Marvel is ordered to be the chief fund raiser.  Captain Marvel can no longer fight crime as he finds funds for the new temple! 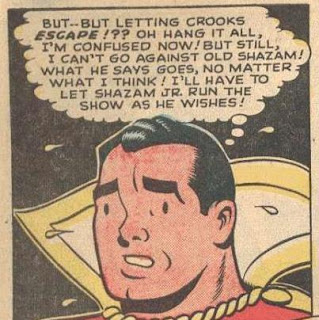 Crime begins to run rampant as Captain Marvel is ordered by Shazam, Jr. to not get involved.  Captain Marvel makes a trip to the Rock of Eternity to find out from Shazam himself if he does indeed have a son.  When asked, Shazam tells Cap, "Why, yes, I do have a son!" but before he can explain Captain Marvel heads back to Fawcett City feeling foolish for being suspicious of Shazam, Jr.

Shortly after his arrival back in Fawcett City, Captain Marvel soon discovers that Shazam, Jr. is a sham - he is really Magico the Magician who used his trickery to fool Cap momentarily.  Magico makes a full confession and Captain Marvel assures him that all the money raised by him will go to charity.

Captain Marvel now faces the final conundrum of the story,  Old Shazam had tried to call him back but he didn't hear him.  What was it that Shazam needed to tell Captain Marvel?  Shazam wanted to tell him that he - Captain Marvel - was his son! 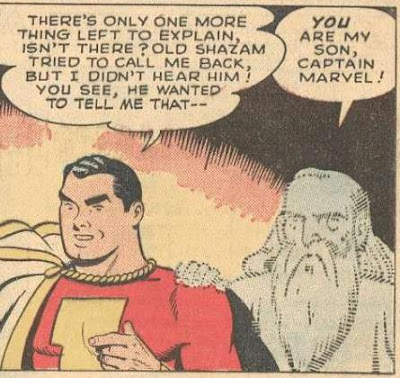 I enjoyed this story and honestly didn't know where it would end.  I didn't know if Shazam would have a son or if this was just another one of Sivana's plots.  It turns out that Magico the magician used Captain Marvel's servant heart against him to try and scam money for his own use.  I've noticed that in many of Cap's adventures, his kindness and good heart is used as a weapon against him.  But as in all Captain Marvel adventures, the end of the story has Captain Marvel triumphing over the villain.
Posted by Jeff at 9:34 AM 2 comments:

Captain Marvel and the Cape-Less Caper

Something happens to Captain Marvel's uniform in Whiz Comics #11 and #12 - his cape is missing!

No, Sivana didn't take it, nor was it part of the story line in each comic.  Interestingly, Cap was cape-less for legal reasons stemming from the lawsuit between Fawcett Comics and National Comics which published Superman.

On page 43 of The Fawcett Companion it states that "...Captain Marvel is deliberately shown capeless as an experimental concession to DC to eliminate similarities to Superman. However, when Fawcett’s lawyers discovered Superman’s defective copyright technicality, Captain Marvel’s distinctive cape returned to him after disappearing for only two issues (Whiz Comics #11 and 12)."  (Fawcett Companion, ed. P.C. Hamerlinck (Raleigh, NC: TwoMorrows Publishing, 2001))

I'm glad they kept Captain Marvel's cape as it is an integral part of his uniform.  His cape is just as important and significant as the lightning bolt on his chest and captain's rank on his sleeves!!  While Captain Marvel's cape-less caper lasted only two editions, ultimately National Comics/Superman would win the legal battle.