Clearly my blog is all about the Captain Marvel of the '40s and '50s and I have tried to stay away from getting into the Shazam of DC's New 52.  However, I became curious about how well some of the newer Captain Marvel/Shazam comics did via sales figures and I was pretty amazed!

But how well did Thunderworld do where it really counts for comic publishers - did it sell?  Holy Moley - did it sell!  Thunderworld ranked #41 out of 421 comics sold to North American comic shops as reported by Diamond Comic Distributors.  Thunderworld sold 47,714 copies in December of 2014.  Clearly fans new and old loved this Captain Marvel adventure. 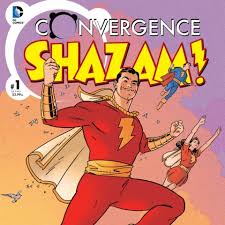 Convergence Shazam had 2 issues with a fantastic story and art.  Like Thunderworld, it featured Captain Marvel and the Marvel Family.  It didn't quite have the whimsical nature of Cap in Whiz Comics, but it wasn't a dark and gritty story like many of today's comics.

The combined sales of Thunderworld and Convergence Shazam is a phenomenal 120,285 copies!  Each edition sold well and ranked high in the sales chart thus indicating a true desire from comics readers to see more issues of Captain Marvel in action.

In my opinion, Thunderworld and Convergence Shazam offer Captain Marvel fans what they want.  These titles bridge the gap for both old and new fans.  They refresh the Captain Marvel character without damaging his origin or disenfranchising loyal fans of the Captain Marvel of the '40s and '50s (of whom I am one!)!  It is my sincere hope that DC comics takes note of this and gives us more like it.