The illustration shows the classic magic lightning bolt coming down after Billy Batson says, "SHAZAM!" It tells us that it is the "magic lightning that changes Billy to his other mighty self -- Captain Marvel!"

Another proof is found in Captain Marvel Adventures #41.  (I wrote about this edition previously in another post.)  Here we have Billy Batson opening a letter given to him by the wizard Shazam.

Captain Marvel Adventures #69 tells the story of the King of Grafstan who wants to make Captain Marvel a knight. (I'll be writing an upcoming post about this edition!)  Billy Batson gets the message from Mr. Morris and says, "Captain Marvel will have to decide about this himself." 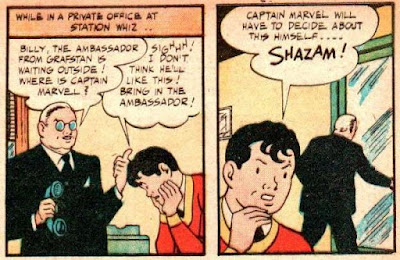 Why can't Billy decide?  Because Captain Marvel is a different person! If Billy Batson is Captain Marvel, there would be no need to transform, he could make the decision himself!

Finally, let me share once again the very first time Billy calls down the magic lightning from Whiz Comics #2. 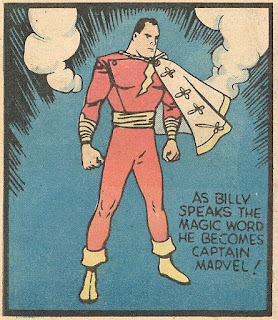 I hope you've enjoyed this article and found it informative - thanks for reading!

(NOTE: The idea that Billy Batson stays Billy Batson but older and with muscles when he says, "SHAZAM!" is a new twist to the Captain Marvel origin that started in 1987 (Shazam: A New Beginning) and has continued with the Shazam character of DC's 'New 52' comics.)