When Billy meets with Shazam, he transforms into Captain Marvel and Shazam asks him to give an account of what he has been doing the last four years.  As Cap recounts what he's done, Shazam interrupts and let's him know that he's proud of Cap and his accomplishments.  Shazam then proceeds to explain that every four years the seven deadly enemies of man meet together and plot evil against the world.  And, as a matter of fact, they are meeting as Shazam and Captain Marvel speak!

Captain Marvel must now find these seven deadly enemies and bring them to justice.  But before he leaves, Shazam commands him report to him every leap year with their next meeting in 1948! 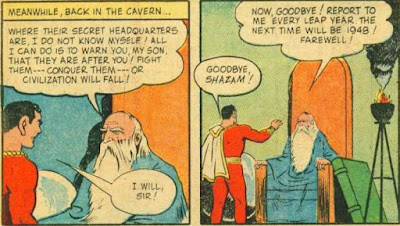 Now just so you know, Captain Marvel does find and foil the seven deadly enemies.  I won't spoil the details but here's one picture of Cap in action.

So there you have it.  Every leap year Captain Marvel was to report to Shazam. I haven't had a chance to research if these future meetings were captured in the comics, but if they did I'll be sure to update this post.  This was an interesting little fact I didn't know about Captain Marvel and I'm glad to have discovered it while reading through one of his comics.  This is just one more thing that makes me like this character!

Email ThisBlogThis!Share to TwitterShare to FacebookShare to Pinterest
Labels: Did You Know, Shazam