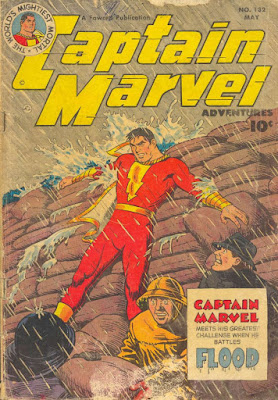 I'm going to try and highlight a Captain Marvel comic every other week - hopefully I'll be consistent with this!  For this week I want to highlight Captain Marvel Adventures #132.  I absolutely love the cover and consider it one of the best for Cap.  You see Cap straining to hold back the flood waters by trying to keep the sandbag wall from collapsing.  You can see the fear and desperation in the eyes of the men around him while you see the determination to stand on Cap's face.

This issue features three Captain Marvel stories.  First, Captain Marvel Battles Flood!  I'm wondering if this was supposed to be like a public service message for the Red Cross or was in response to some major flooding in the US at that time.

The next Cap story is The Man Who Never Saw Captain Marvel in which a blind man helps Cap catch crooks and finally has his dream come true of seeing Captain Marvel with his own eyes.

The final story is The Dizzy Dervish Day.  Billy Batson and his boss, Mr. Morris, are on a vacation cruise and stop in the land of Turkestan.  They meet the last sultan, Abba Dabba Babba who plays magical music that makes everyone who hears it dance a whirling dervish!  How will Captain Marvel save the day?  He does, but you'll have to read about for yourself.  (You can read it here!)

The comic also includes some other stories with characters like Freddy Freshman and Captain Kid.

My favorite aspect of this comic is the cover and the more serious flood story.  The Dizzy Dervish Day story is a more typical whimsical story we see in other Captain Marvel stories.