The Death of Captain Marvel! 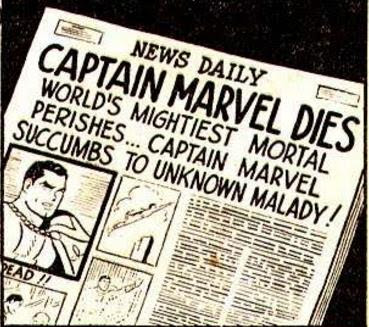 Decades before the comic world was shocked by the death of Superman in 1992 and Captain America's demise in 2007, we had the untimely announcement of Captain Marvel's death!

Captain Marvel Adventures #88 gives us the story, Captain Marvel's Funeral.  The story begins with a mystic by the name of Draka, Master of Zogo, being banished from his native land of Tibruk.  Draka makes his way to Fawcett City and we discover that he has brought Sterling Morris under the spell of his Zogo magic.

Captain Marvel discovers that Draka is using the power of Zogo to get Mr. Morris to leave his entire fortune to him when Cap saves Mr. Morris from jumping out a window.  When Draka is confronted by Captain Marvel, he zaps Cap with a spell that makes Cap's spirit leave his body!  Cap's body lies on the floor while he desperately tries to get people's attention to tell them he's not dead.  Only Draka can hear him - and he's not going to help! 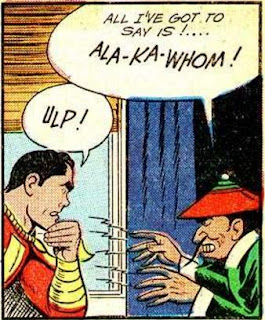 Draka is free to act with Captain Marvel unable to do anything to stop him.  But Captain Marvel finds a way to defeat him.  Mr. Morris is reading a book on Zogo and Cap sees the spell that is needed to get his spirit back into his body.  He's able to get Morris to read how he can rescue him, and Morris heads off to the funeral home to give it a try. 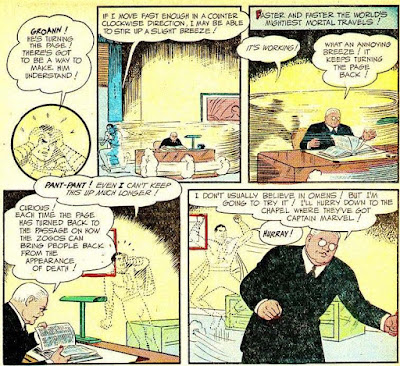 Mr. Morris says the magic words, "Ala - ka - whom!" over Captain Marvel's body, and just in the nick of time Captain Marvel's spirit and body reunite and is able to save Mr. Morris from Draka's dastardly attack!  Draka is just about to zap Cap again when Captain Marvel hits him so hard that Draka forgets everything he ever knew about Zogo! 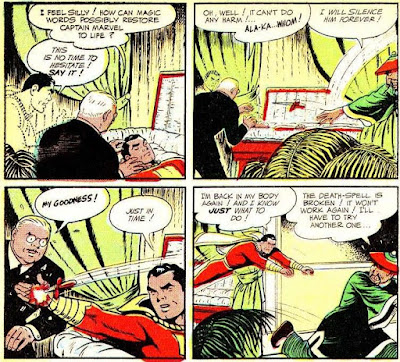 This was another great adventure that blends humor and action together.  To some degree, Mr. Morris is the hero of this adventure as he was the one that gets Captain Marvel's spirit reunited with his body.  So while this 'death of Captain Marvel' wasn't on the same scale as Superman and Captain America, it was just as entertaining and marvelous to read.
Posted by Jeff at 7:27 AM