Superbowl 50 is just a few days away so I thought it was a good time to tell the tale of Captain Marvel, football champion!  This adventure comes from the pages of Whiz Comics #11.

The story begins with star newsboy Billy Batson sent to Marvel College undercover to try and uncover if football coach Slug Samson is up to no good.

With the help of Ben Strang, the football team captain, Billy becomes the water boy!  It doesn't take long for Billy to realize Coach Samson is up to no good.  Samson tells the team to take it easy as their opponents are pushovers and they can beat them with their eyes closed.  Billy is immediately suspicious that coach Samson is trying to throw the game.  Later, Billy follows coach Samson and finds he's in on a plan to throw the game, making a lot of money in the process! 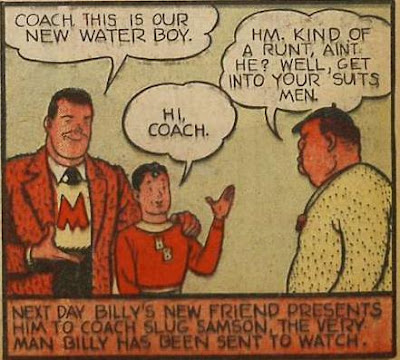 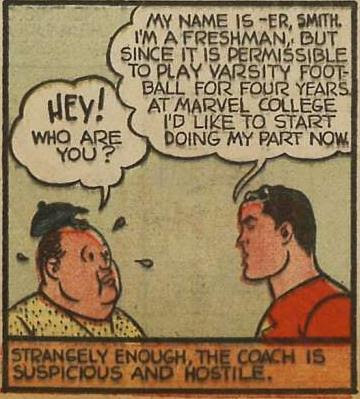 The day of the big game arrives and sure enough, some sideline shenanigans begin and Marvel College team players start dropping out with injuries until only Captain Marvel is left to play!  With only 3 minutes left in the game, Cap shows his pigskin power and wins the game!! 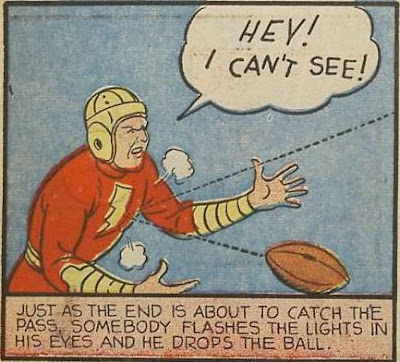 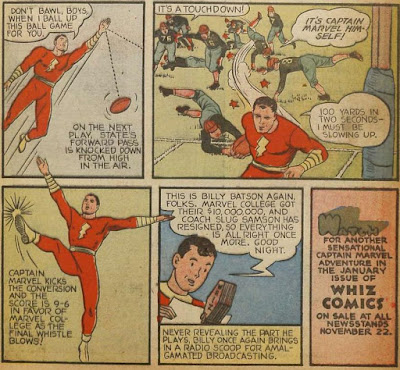 I need to point out that there is a cameo appearance by Pete Costanza as a Marvel College football player.  Costanza was C. C. Beck's (Captain Marvel's primary artist) assistant.  Beck included his fellow Fawcett artist in this issue, and according to notes I've read, Beck drew him into some other stories as well. 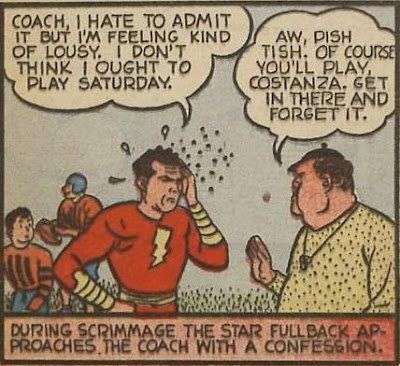 I learned some things from this comic, for example, I didn't know there was a Marvel College in Fawcett City!  What I really enjoyed about this story is the way both Captain Marvel and Billy combined forces to foil coach Samson's plan.  I love football, so seeing Cap play and win the big game was awesome!  I only wish at least one NFL team would do the right thing and model their uniform after Captain Marvel's!!