Captain Marvel and the Twisted Powers 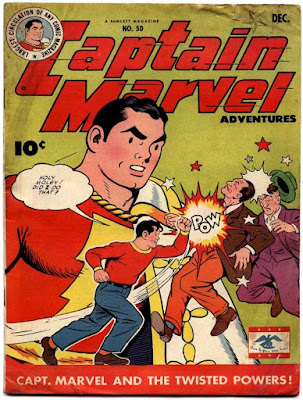 In Captain Marvel Adventures #50 (published October 24, 1945*) we have an awesome adventure for Billy and Captain Marvel.  We also learn a little bit more about the magic lightning bolts that transform them!  In the story "Captain Marvel and the Twisted Powers" Billy somehow ends up with Cap's powers while Captain Marvel is powerless.  How did this happen?  Let's take a look at the story!

The story begins with Billy taking a vacation at Pine Valley Hotel.  Billy's hoping to have a quiet week away from station WHIZ and from the pressures of his celebrity status as boy newscaster.  Billy's sadly mistaken as he has barely made it to his room before he hears a cry for help.  Billy says the magic word, "Shazam!" and is transformed into Captain Marvel who rushes to the scene of a robbery at the hotel lobby.  But unbeknownst to Captain Marvel, there's a problem with the magic lightning bolt that transformed him. 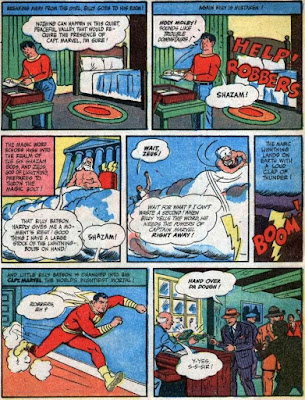 Cap confronts the hotel hoodlums but soon learns that while he has transformed into Captain Marvel, he isn't the world's mightiest mortal as he has no powers! He can't punch, he can't take a punch, and he can't fly!  Bystanders soon think Cap is an overrated fake.  Even Captain Marvel himself is perplexed by his missing powers!  Cap says the magic word and is transformed back into Billy Batson.  However, once again we are shown that in the realm of the gods, they are trying to get Zeus' attention about a problem with the magic lightning bolts! 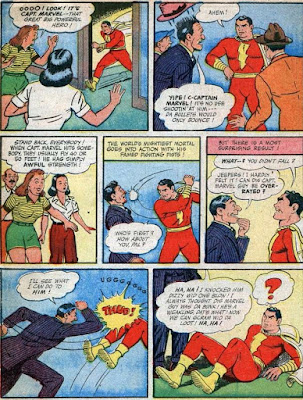 Billy is just as perplexed as Cap is and doesn't even notice that when he kicks a large rock, he sends it flying.  That's our first clue about what's happening with the powers of Captain Marvel! 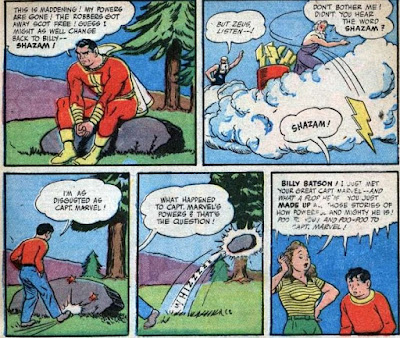 In their hideaway in the woods, we soon learn that the crooks that robbed the hotel have cooked up a new plan - a plan to get rid of Captain Marvel.  The leader, Joe Bloe, figures that since Cap is always around Billy Batson, if they bother Billy, Cap will show up.  And since Cap is powerless, they'll take care of him for good!  The mob makes their move and sneak in to Billy's hotel room and toss him to the ground several floors below - but Billy hits the ground unharmed!  Billy says the magic word, transforming himself into Captain Marvel.  But since Cap is now powerless, the crooks capture him and are now ready to deal him a death blow. 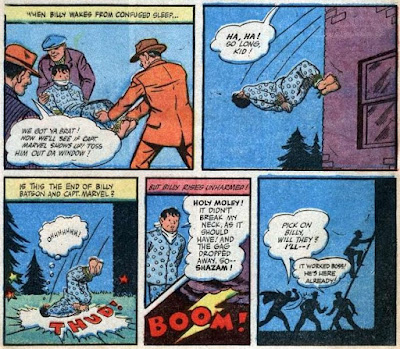 Captain Marvel has figured out what has happened with his powers and now he transforms back to Billy.  Billy has also figured out that he has Cap's powers, and sure enough, bullets bounce off of him, he has a powerful punch...and he can fly!!  In short order, Billy captures the crooks. 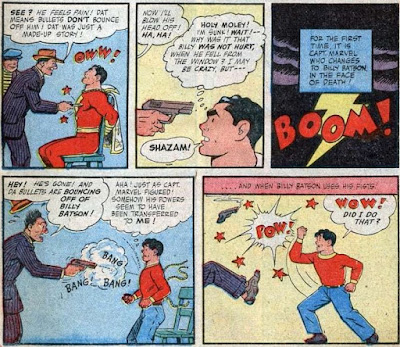 The scene shifts to the realm of the gods where we learn what caused the mixup giving Billy the powers of Shazam.  Vulcan** tells Zeus that the magic lightning bolts were defective because they transformed Billy into Captain Marvel as they should have, but they didn't contain the powers of Shazam!  The lightning bolts that transformed Cap back to Billy were the ones that contained the magic powers, that's why Billy was having Cap's powers and Captain Marvel was powerless! 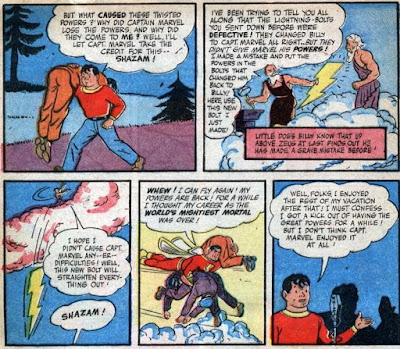 Billy says "Shazam!" once more and this time Zeus throws a corrected lightning bolt, transforming Billy into Captain Marvel and giving him his powers.  Billy closes the adventure by letting us know that he was able to enjoy the rest of his vacation and got a kick out of having Cap's powers, but he doesn't think Captain Marvel enjoyed the little adventure!

Holy Moley what a great story!  It was great to have a role reversal with Billy being powerful and Cap having lost his powers.  It also gave us a little more insight into the magic lightning that transforms them.  Based on this story we learn that there are different magic lightning bolts that Zeus uses:  one bolt transforms Billy into Captain Marvel and gives Cap his powers, and another bolt transforms Cap into Billy but does not give Billy any powers!  All in all this was a tremendous story and has become a new favorite of mine.


*According to Mike's Amazing World of Comics
**Shazam! #12 (February 19. 1974) references this story and gives the name of Vulcan to the character that creates the magic lightning
Posted by Jeff at 10:12 AM