A Biography of the Wizard Shazam

Sometimes when we think of the wizard Shazam, we only think of his appearance in Whiz comics #2 when he gives Billy Batson his powers and commissions Captain Marvel.  But I've found within the pages of Captain Marvel's comics a few glimpses of Shazam's life before his meeting with Billy.  Based on what I've found, let me present you with a brief biography of the wizard Shazam!

Shazam is the guardian of mankind. (Whiz comics #47)  In ancient times, Shazam was known as Shazamo.  He was the leader of seven great heroes: Solomon, Hercules, Atlas, Zeus, Achilles, Mercury and Oggar.  These heroes helped mankind at the direction of Shazamo.  Oggar rebelled against Shazamo and was banished to the mortal world, and Shazamo struck the 'o' for Oggar from his name, thus becoming Shazam.  (Captain Marvel Adventures #62 "The Arena of Horror")  Shazam was also a leader among the gods on Mount Olympus and assisted them in their counsel while dealing with heavenly matters. (Marvel Family #12 "Captain Marvel in the Kingdom of Ulysses")  During this time of Shazam's ancient past he defeated seven evil gods, turning them into stone statues of the seven deadly enemies of man. (Captain Marvel Adventures #137)

During the First Dynasty of Egypt (c. 3150 - 2890 BC), Shazam used his magic powers to help Pharaoh.  An Egyptian impersonating Shazam attempted to rob Pharaoh, but his plot was foiled and Shazam's name was cleared.  (Captain Marvel Adventures #79 "Captain Marvel and the Ancient Crime") 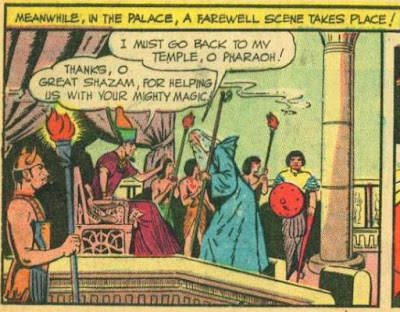 In 3055 BC, Shazam chooses Teth-Adam to be his champion to fight evil in the world.  When Teth-Adam spoke Shazam's name, he became Mighty Adam.  Mighty Adam abused his powers, killed Pharaoh and planned to conquer the world.  Shazam changed Mighty Adam's name to Black Adam and banished him from the earth to the farthest star in the universe!  Shazam resumed his duties as earth's protector from evil.  (Marvel Family comics #1 "The Mighty Marvels Join Forces!")  Note:  I've read this comic multiple times and in no place does Shazam indicate that Mighty Adam was going to be his replacement.  Could it be Mighty Adam and Shazam were going to be a team to fight evil?

In 3048 BC Shazam faced a threat to our world from the Mad Mummy!  The Mad Mummy was ruler of the netherworld who invaded the world of the living to take over as ruler!  Shazam defeated the Mad Mummy and sent him and his evil pyramid to the bottom of the ocean! (Marvel Family comics #79) 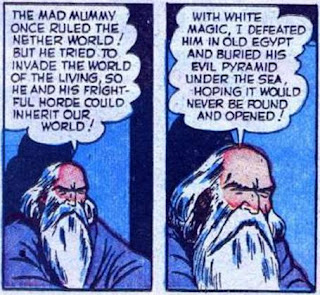 Shazam's history is clouded in mystery after he banishes the Mad Mummy.  We next find Shazam in December of 1939.  Here we have Shazam in his final hours.  He has summoned Billy Batson and let's Billy know who he is and that he has chosen Billy to be his successor.  Billy speaks his name, "Shazam!" and transforms into Captain Marvel!  Shazam commissions Captain Marvel as his successor and it is Cap's "sacred duty to defend the poor and helpless, right wrongs, and crush evil everywhere."  When Captain Marvel speaks Shazam's name, he transforms back into Billy Batson and Shazam is crushed by a huge block of granite, thus ending Shazam's life.  (Whiz Comics #2) 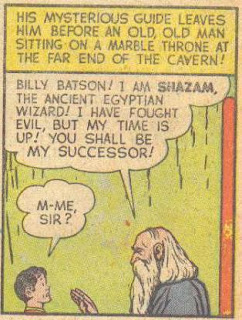 Shazam now lives in his castle on the Rock of Eternity (The Marvel Family #7) and can transport himself to his earthly headquarters/throne room in the underground subway tunnel (where he first met Billy) by using a bracelet made of Shazamium - a mystical element unknown to man!  The Shazamium bracelet allows him to adopt ethereal form, and whisk back and forth between the Rock of Eternity in the wink of an eye. 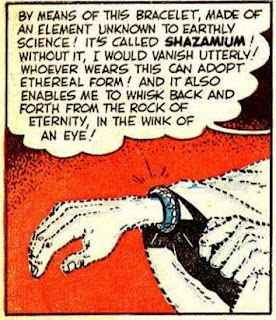 Since commissioning Captain Marvel and the Marvel Family, Shazam hasn't exactly gone into retirement.  He keeps himself busy in the following ways: 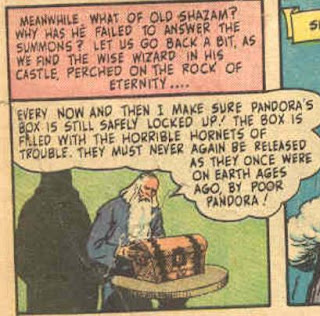 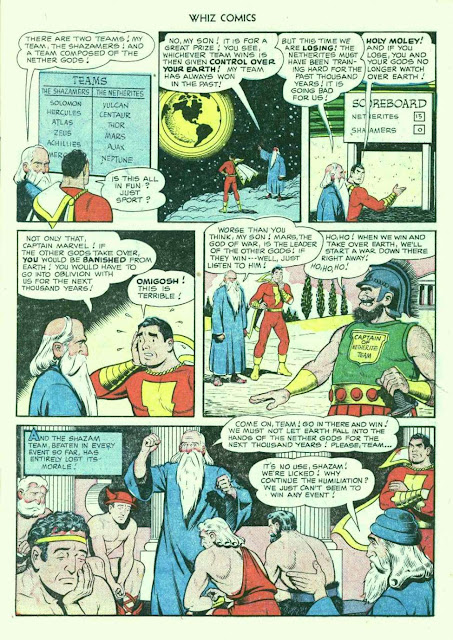 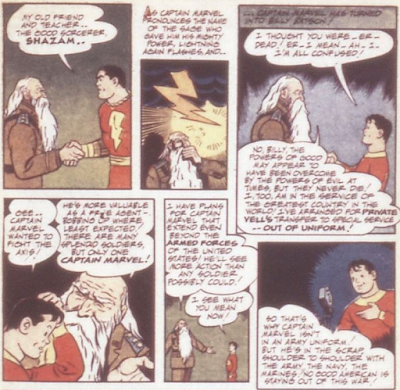 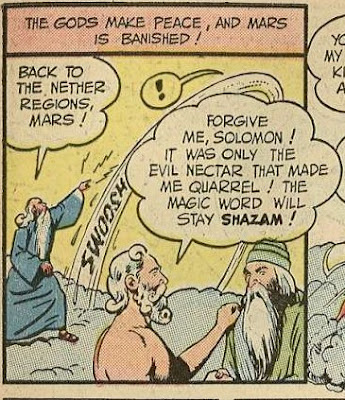 I'm so glad to have found glimpses into Shazam's biography from the pages of Captain Marvel's comics.  Once again it has given me such a great appreciation for the rich history of Captain Marvel, Shazam, and the other Marvel characters from the pages of Fawcett comics.  It's been a lot of work - and a lot of fun - piecing Shazam's history together and I hope you've enjoyed reading it.