Did you know that Mary Marvel was once sent an extra powerful lightning bolt to get her out of a trap set by Sivana?  We learn about this in Mary Marvel #1 (published November 14, 1945*) where Sivana tricked her into wearing earrings that prevented her from gaining the Shazam powers.

We know that when Mary says the magic word, "Shazam!" she is transformed into Mary Marvel by a magic lightning bolt.  We learned in Whiz Comics #125, it's Zeus that throws the magic lightning that transforms Mary's brother Billy Batson into Captain Marvel (you can read about that here)!

In Mary Marvel #1, we find that Mary calls out to her patron goddesses to help her out of Sivana's trap and they respond!  Minerva orders Hippolyta to fashion an extra powerful lightning bolt to help Mary.  Hippolyta prepares the bolt and throws it from the heavens!  The powerful magic lightning defeats Sivana's trap and transforms Mary into Mary Marvel and restores the Shazam powers to her. 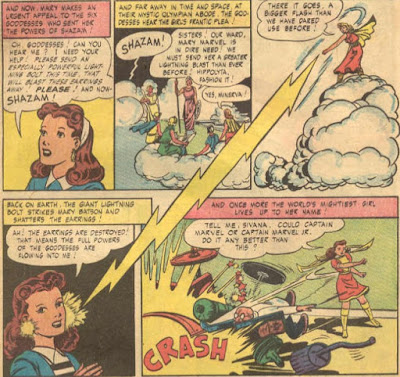 *According to Mike's Amazing World of Comics
Posted by Jeff at 8:12 AM

Email ThisBlogThis!Share to TwitterShare to FacebookShare to Pinterest
Labels: Did You Know, Magic Lightning, Mary Marvel