Have you ever noticed that there are two different versions of the cover of Whiz Comics #2?  A few months ago I noticed some differences in what was being shown as the cover of Whiz Comics #2 on different websites.  As a Captain Marvel fan I thought it was important that I know what the true and original cover was. You can see the differences by taking a look at the two examples below.


Notice that in Example #1, the words 'Gangway for Captain Marvel!' are missing from the bottom right, and on the left-hand side it only shows one bad guy near the car.  In Example #2, it has the words 'Gangway for Captain Marvel!' on the lower right and has two bad guys near the car!  This made for a Captain Marvel comic cover conundrum - which one is the real and original cover to Cap's first comic?  (Note:  There are a couple of other minor differences, but I just wanted to capture the major differences!)

I've discovered that the original cover to Whiz Comics #2 is Example #2 above.  I determined that as I was doing some research on the differences and came across an auction for an original copy of the comic.  Below is a picture of the item that was up for auction. 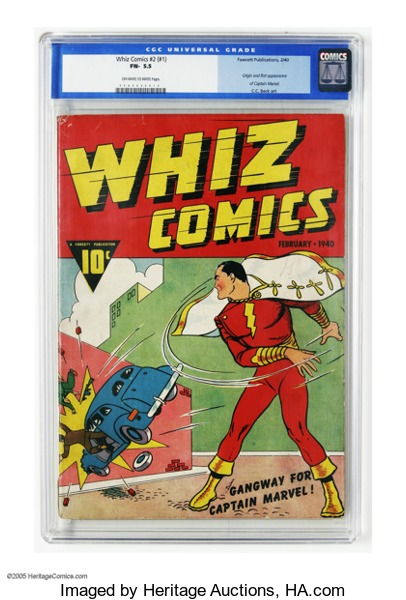 As you can see, this is an original copy of Whiz Comics #2 and it clearly displays both the words 'Gangway for Captain Marvel!' and the two bad guys by the car!  That solved the mystery of which cover was the original and put an end to my comic cover conundrum!
Posted by Jeff at 7:26 AM