Captain Marvel and the Space Dragon 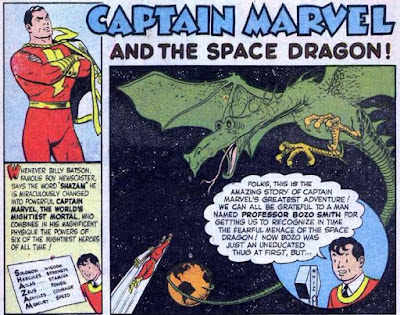 The adventure begins with Captain Marvel sending a criminal, Bozo Smith, to jail.  Bozo repents and reforms after realizing crime doesn't pay.  Bozo uses his time wisely and begins a serious study in astronomy.  Bozo's studies catch Captain Marvel's attention, so Cap sends him a gift to help him in his studies.  (This really shows Cap's character - he shows no ill will towards criminals and will help them get a new start in life!)

While it seems like Bozo has truly changed his ways, Billy suddenly gets an urgent appeal from the jail for Captain Marvel to visit Bozo as soon as possible as he's been sent to the violent ward of the prison.  Has Bozo been clowning around about his reformation?  Billy transforms to Captain Marvel who quickly makes his way to visit Bozo in prison.  Cap says, "Bozo has been trying hard to make a new start!  The least I can do is to help him!" 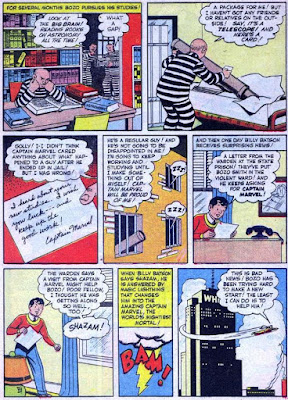 Captain Marvel meets with Bozo who informs him that the earth is in imminent danger - it will be eaten alive if action isn't taken soon!  "Holy Moley!  Poor Bozo is as nutty as a squirrel's nest!" is Captain Marvels reaction to the news!  But upon reviewing Bozo's research, Cap confirms that the convicts theory is correct.  Bozo has determined that a planet sized egg containing a monster has entered our solar system!  Once the egg hatches, the monster that emerges may destroy the world.

To get definitive proof of Bozo's theory, Cap flies into space and to his horror he soon learns Bozo was 100% accurate.  The planet-sized egg hatches a space dragon!  Cap notices the space dragon eat a passing meteor, and then the dragon attempts to eat him!  As the space dragon makes his way towards earth, Captain Marvel swiftly gathers a batch of meteors and feeds them to the dragon to fill his stomach while Cap can take action to defeat him.

The greatest scientific minds gather to discuss the menace of the space dragon, Bozo Smith is among them.  Bozo opines it will take atomic rockets to destroy the space dragon, so Cap goes to work gathering the rockets and setting up a plan to defeat the dragon.  Captain Marvel gives the launch command and the stockpile of rockets make a direct hit on the space dragon.  Though the bombs burst in air, we see the dragon's red glare as he was unharmed by the barrage.  The dragon has even caught one of the atomic rockets and slings it towards earth!  It's the last atomic rocket and now it's hurtling towards earth!  Captain Marvel grabs the rocket, and "disregarding his own safety, Captain Marvel dives headlong into the jaws of the titanic monster!"  Cap sets off the atomic rocket inside the dragon, finally destroying it.  Cap then hurls the dragon into the Sun for cremation. 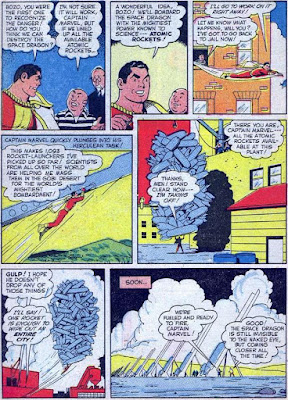 At the end of the story we find Bozo Smith, former convict, has now been appointed as a professor of Interspatial Physics at the University.  Professor Smith informs us that we are no longer in any danger of any more space dragons!

I enjoyed this story and it's one of my favorites.  Not only is it an entertaining adventure, it also shows us a new depth of Captain Marvel's character.  He befriends the very man he put in jail, encourages his reformation, and takes action to help him when no one else would.

Another aspect of this story that I noticed is that it's very similar to an episode of British sci-fi show Doctor Who.  In the episode titled "Kill the Moon" (episode 7 of season 8 and first aired on October 4, 2014),  Doctor Who determines the earth's moon is actually an egg that is about to hatch, and if it does, the effects on earth will be cataclysmic!  I won't go into all that happens, but I wonder if the writers at Doctor Who had read Captain Marvel Adventures #104 and came up with their story?!?!  The Doctor Who/Captain Marvel connection also makes me enjoy this story even more!

Captain Marvel and the Space Dragon truly is a great adventure and a great story of redemption and self-less heroism.  No wonder it's one of my favorite Captain Marvel adventures!